Greta Thunberg: “Doing our best is no longer good enough”

Teenage climate-activist, Greta Thunberg, says that the climate crisis must be dealt with the same urgency lent to the coronavirus pandemic.

Greta Thunberg says the world needs to learn the lessons of coronavirus and treat climate change with similar urgency. That means the world acting “with necessary force”, the Swedish climate activist says in an exclusive interview with BBC News. She doesn’t think any “green recovery plan” will solve the crisis alone. And she says the world is now passing a “social tipping point” on climate and issues such as Black Lives Matter.

“People are starting to realise that we cannot keep looking away from these things”, says Ms Thunberg, “we cannot keep sweeping these injustices under the carpet”.

She says lockdown has given her time to relax and reflect away from the public gaze. Ms Thunberg has shared with the BBC the text of a deeply personal programme she has made for Swedish Radio. In the radio programme, which goes online this morning, Greta looks back on the year in which she became one of the world’s most high-profile celebrities.

The then 16-year-old took a sabbatical from school to spend a tumultuous year campaigning on the climate. She sailed across the Atlantic on a racing yacht to address a special UN Climate Action Summit in New York in September. She describes world leaders queuing to get pictures with her, with Angela Merkel asking whether it was okay to post her photo on social media. The climate campaigner is sceptical of their motives. “Perhaps it makes them forget the shame of their generation letting all future generations down”, she says. “I guess maybe it helps them to sleep at night.”

It was in the UN that she delivered her famous “how dare you” speech. “You have stolen my dreams and my childhood with your empty words”, she told the world leaders gathered in the UN Assembly. She appeared on the verge of tears as she continued. “People are dying,” she said, “and all you can talk about is money and fairy tales of eternal economic growth. How dare you?”

She knew it was a “lifetime moment” and decided not to hold anything back, she says now. “I am going to let my emotions take control and to really make something big out of this because I won’t be able to do this again”. 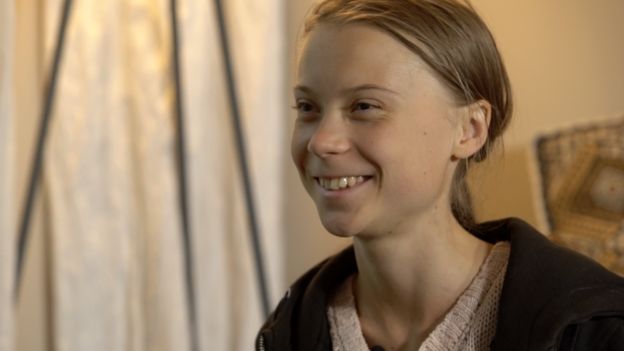 She describes travelling back from the UN to her hotel on the subway and seeing people watching the speech on their phones, but says she felt no urge to celebrate. “All that is left are empty words”, she says.

The phrase reflects her deep cynicism about the motives of most world leaders. “The level of knowledge and understanding even among people in power is very, very low, much lower than you would think,” she told the BBC.

She says the only way to reduce emissions on the scale that is necessary is to make fundamental changes to our lifestyles, starting in developed countries. But she doesn’t believe any leaders have the nerve to do that. Instead, she says, they “simply refrain from reporting the emissions, or move them somewhere else”.

“Words like green, sustainable, ‘net-zero’, ‘environmentally friendly’, ‘organic’, ‘climate-neutral’ and ‘fossil-free’ are today so misused and watered down that they have pretty much lost all their meaning.”

She claims the UK, Sweden and other countries do this by failing to account for the emissions from ships and aircraft and by choosing not to count the emissions from goods produced in factories abroad.As a result, she says in her radio programme, the whole language of the debate has been degraded. “Words like green, sustainable, ‘net-zero’, ‘environmentally friendly’, ‘organic’, ‘climate-neutral’ and ‘fossil-free’ are today so misused and watered down that they have pretty much lost all their meaning. They can imply everything from deforestation to aviation, meat and car industries,” she said.

Ms Thunberg says the only positive that could come out of the coronavirus pandemic would be if it changes how we deal with global crises: “It shows that in a crisis, you act, and you act with necessary force.”

She says she is encouraged that politicians are now stressing the importance of listening to scientists and experts. “Suddenly people in power are saying they will do whatever it takes since you cannot put a price on human life.”

She hopes that will open up a discussion about the urgency of taking action to help the people who die from illnesses related to climate change and environmental degradation right now as well as in the future.

But she remains deeply pessimistic about our ability to keep any temperature increases within safe boundaries. She says that, even if countries actually deliver the carbon reductions they’ve promised, we’ll still be heading for a “catastrophic” global temperature rise of 3-4 degrees.

The teenager believes the only way to avoid a climate crisis is to tear up contracts and abandon existing deals and agreements that companies and countries have signed up to. “The climate and ecological crisis cannot be solved within today’s political and economic systems”, the Swedish climate activist argues. “That isn’t an opinion. That’s a fact.”

Thunberg talks movingly of a road-trip she and her father took through North America in an electric car borrowed from Arnold Schwarzenegger, the Hollywood actor turned politician and climate campaigner. She visited the charred remains of Paradise, the Californian town destroyed by a wildfire in November 2018.

She is shocked by the carbon-intensive lifestyles she saw in the US. “Apart from a few wind power plants and solar panels,” she says, “there are no signs whatsoever of any sustainable transition, despite this being the richest country in the world.”

But the social inequities struck her just as forcefully. She describes meeting poor black, Hispanic and indigenous communities. “It was very shocking to hear people talk about that they can’t afford to put food on the table”, she explained.

Yet Greta Thunberg says she has been inspired by the way people have been responding to these injustices, particularly the Black Lives Matter protests following the death of George Floyd in May. She believes society has “passed a social tipping point, we can no longer look away from what our society has been ignoring for so long whether it is equality, justice or sustainability”. She describes signs of what she calls an “awakening” in which “people are starting to find their voice, to sort of understand that they can actually have an impact”.

“Doing our best is no longer good enough. We must now do the seemingly impossible. And that is up to you and me. Because no one else will do it for us.”

That is why Greta Thunberg says she still has hope. “Humanity has not yet failed”, she argues.

She concludes her radio documentary in powerful form. “Nature does not bargain and you cannot compromise with the laws of physics,” the teenager asserts. “Doing our best is no longer good enough. We must now do the seemingly impossible. And that is up to you and me. Because no one else will do it for us.”