“They are the most aggressive,” says one of the slaughterhouse staff. “It’s just their personalities.”

As the Beirut traffic continues its usual honking chaos outside, the animals wait to be slaughtered. When the time comes they go, one at a time, through the hatch into the gleaming tiled kill room.

“They don’t see each other being killed,” says our guide. They are put on a hoist and tugged up by their legs, and then their throat is slit. There is no stunning here: the cattle is slaughtered according to the rules of halal, which in most interpretations means that the animal should be conscious when it dies. The floor glistens with water; it is washed down between each kill so the animals can’t smell the blood, although they may notice the carcasses of their brethren, dangling from hoists around them.

The killing must be quick and well done, says one slaughterhouse employee, in his early twenties. He doesn’t like to think about what he does, he says. But it’s a job. 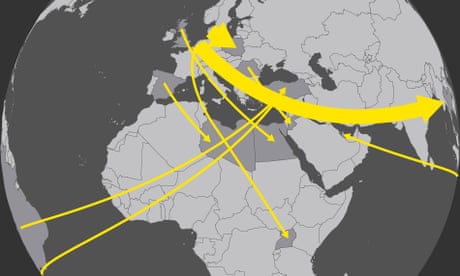 Two billion and rising: the global trade in live animals in eight charts

The reputation of slaughterhouses in the Middle East is poor among animal welfare campaigners. Peter Stevenson, chief policy adviser at Compassion in World Farmings says that in his 28-year career “there is nothing I have seen as awful as slaughterhouses” in the Middle East. Investigation after investigation has exposed filthy conditions, little or no concern for animal welfare, badly trained staff, and, above all, the practice of halal slaughter, which often means animals are killed without being stunned first.

Live animal exports to the Middle East have risen steadily over the past two decades, particularly from Europe. Trade to Egypt, Israel, Jordan, Kuwait, Lebanon, Oman, Qatar, and Saudi Arabia has risen steeply over the last fifteen years. In just one year, Turkey went from importing $600m (£457m) worth of animals in 2016 to $1.2bn in 2017.

There are a number of reasons for the rise, but it is mainly due to an increasing demand for meat and dairy products, and rapidly warming climate pressuring water-stressed nations. Those nations that can afford the political or financial cost are increasingly looking to avoid rearing animals from birth, the more water-intensive option.

As growing populations continue to demand freshly-killed, Middle Eastern nations are increasingly leaning on live imports to meet this need, and reshaping the global marketplace in the process.

It’s a region where meat is often seen as a status symbol of a family’s ability to provide, and serving meat to a hungry guest is considered a demonstration of hospitality and generosity. The Islamic high holiday Eid al-Adha – which translates as festival of sacrifice, honouring the biblical figure Abraham’s willingness to sacrifice his only son – requires that families slaughter a live animal, often a cow, sheep or goat, and distribute the meat between family, friends and neighbours, and the needy.

“We’ve seen a significant increase in the middle-class bracket across the Middle East over the last two decades,” says Emily Hawthorne, from private global intelligence firm Stratfor. “There’s the status symbol that comes from a live sheep – or better yet, a live cow or goat – for Eid al-Adha, as well as for weddings and festivals; the growth of the Middle Eastern middle class has a lot to do with this. This, for example, is why you see Gulf countries playing a huge part [in] live imports from Australia, New Zealand and Pakistan.”

Australia recently enacted a three-month ban on live exports to the Middle East, after a furore over animal welfare concerns. But when one exporting country pulls back, others step forward. “In the midst of a growing demand from Qatar, the UAE, Kuwait and other Gulf countries for Eid al-Adha, [other] countries supplement gaps in supply,” says Hawthorne, listing India, Pakistan and Iran as potential live exporters willing to step in when Australia and other big exporters bail out. “Live export is a thing where you see – political proclivities aside – people need to import what communities [are] demanding,” she says.

Ironically, the warming climate also plays a role in the trade: the lack of water across the Middle East means that it is cheaper to import animals rather than raise them from birth. Dairy cows, a popular import from America and Germany, drink 30–50 gallons of water per day, with high-producing ones consuming even more. Cattle reared for meat consume slightly less water, but the overall amount is enough to encourage water-scarce countries to look for ways to shorten the amount of time they have to care for the animals, while reaping the benefits for their meat industries.

“The water shortage in the Gulf is profound and will only get worse as the population increases,” says Hawthorne. “The reality is that they cannot support water-intense livestock and agriculture on the ground. This means the time you hold livestock is important. As it’s expensive, you can only hold them for a temporary period.”

A US official with knowledge of the Middle Eastern agriculture industry says countries across the region routinely import beef cattle six months before they are due to be slaughtered, a period in an animal’s life when it requires cheaper feed. Crucially, rearing an animal only in its final stage of life also cuts down on water consumption, a key advantage for water-scarce nations in the Gulf and across north Africa.

“Sudan is the largest single supplier of live animals – mostly cows – to Egypt,” they explain, as an example. In Egypt, where the government has placed a premium on local beef, producers import cows at 12-months old, raising them for a final six months before slaughter in order to save on water and the expensive nutrient-rich feed the animals need earlier in life. “Egyptian beef farmers can then sell at market and say their product is Egyptian beef. But in terms of Sudanese water and feed – Egypt saves on those resources,” the official adds.

This bait-and-switch tactic could also benefit authorities’ claims to be helping local producers. “There are many programmes to expand domestic animal production. By importing animals grown in Sudan, rearing them for six months then selling them as Egyptian beef, the government can say: ‘look we’re helping Egyptian farmers’,” the official explains.

But as the trade grows, the issues around management and oversight of slaughterhouses in the region become more pressing. A 2014 investigation by Compassion in World Farming with Animals Australia allegedly uncovered footage of animals exported from the EU being violently handled in abattoirs in the West Bank, Jordan, Lebanon and Turkey, including being dragged into position by their tails and even eye sockets.

“Criticism of slaughter standards in the Middle East is not a disparagement of their religion,” says Stevenson.

“Whenever Muslims see our films they are horrified and say ‘this is not halal’. Traditional religious slaughter calls for one clean cut which severs all of the major blood vessels so the animal loses blood and dies quickly, but in reality animals often receive many stabs and cuts to the throat before losing consciousness … in the slaughterhouse we’ve seen they don’t know how to handle cattle, they’re frightened of them.”

Change is underway, however. In Turkey, steady work by Eyes On Animals and other groups has led to the acceptance of the use of stun guns in some abattoirs, and in October last year Ismailağa Cemaati, the largest Islamic group in the country, publically announced that stunning animals prior to killing them is acceptable and halal.