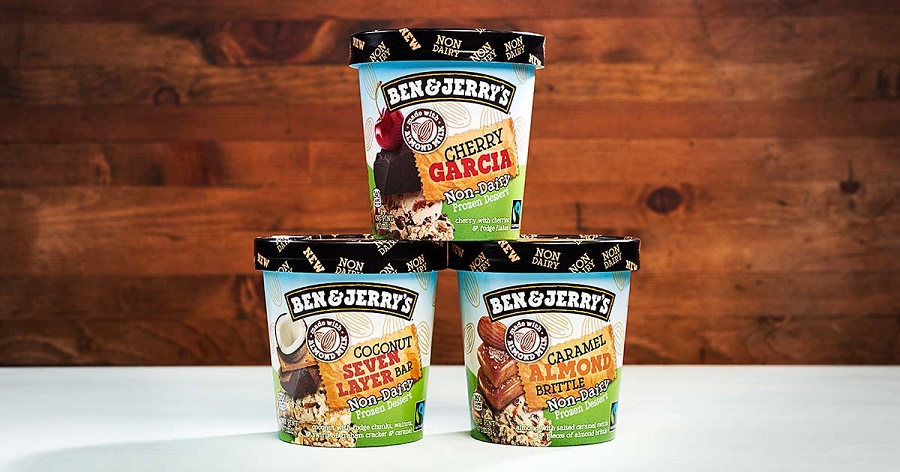 The beloved ice-cream brand is launching a dairy-free ice-cream product to address growing concerns about dairy’s contribution to climate change.

Ben & Jerry’s newest plant-based flavour is dedicated to the idea that we can all help dial back our impact on the environment by eating plant-based foods. The company’s newest ice cream flavour is a non-dairy treat called “Unfudge Our Future,” with a not-so-subtle reference to the fact that if we don’t do anything our future is fudged. The new flavour is being released in partnership with environmental organization 350.org Australia as part of a campaign that hopes to reduce fossil fuel use in that country, which has one of the highest CO2 emission levels per capita in the world.

Ben & Jerry’s adds another flavour to their non-dairy menu

“Un-fudge Our Future,” a chocolate and peanut butter concoction chock full of pieces of fudge brownies & peanut butter cookie dough, joins Ben & Jerry’s line of delicious non-dairy flavours like the singer Lizzo’s personal favourite Netflix & Chill’d and the kid-approved Chocolate Chip Cookie Dough. Ben & Jerry’s started offering non-dairy ice cream in 2017 using an almond milk base to replicate their original flavour creations like Cherry Garcia, P.B & Cookies, and Chocolate Fudge Brownie. They have also introduced a sunflower milk base so that those with nut allergies can get in on the non-dairy fun. Ben & Jerry’s has joined the booming market of non-dairy ice cream offerings like artisanal Van Leeuwen’s, protein-packed Ripple, and calorie-conscious Halo Top.

We love a treat as much as the next person but remember that although it is non-dairy ice-cream, it is still ice-cream. Like many of their other non-dairy flavours, “Un-fudge Our Future” is made with almond milk and a similar flavour will add about 215 calories and 27 grams of sugar per serving to your daily intake. So it’s a treat, and every diet deserves a treat, especially when it’s one that is helping fight the climate crisis.

The company is partnering with the 350.orgAustralia to remind consumers that anyone who chooses a non-dairy ice cream alternative is helping lower greenhouse gas emissions, even in a small way. On its website, 350.org Australia aims to end fossil fuels by building a global climate movement. “The number 350 means climate safety: To preserve a liveable planet, scientists tell us we must reduce the amount of CO2 in the atmosphere from its current level of 400 parts per million to below 350 ppm.”

So the next time you’re in the freezer aisle, opt for a non-dairy pint. Thanks to brands like Ben and Jerry’s, helping the environment has never been so easy or so delicious.