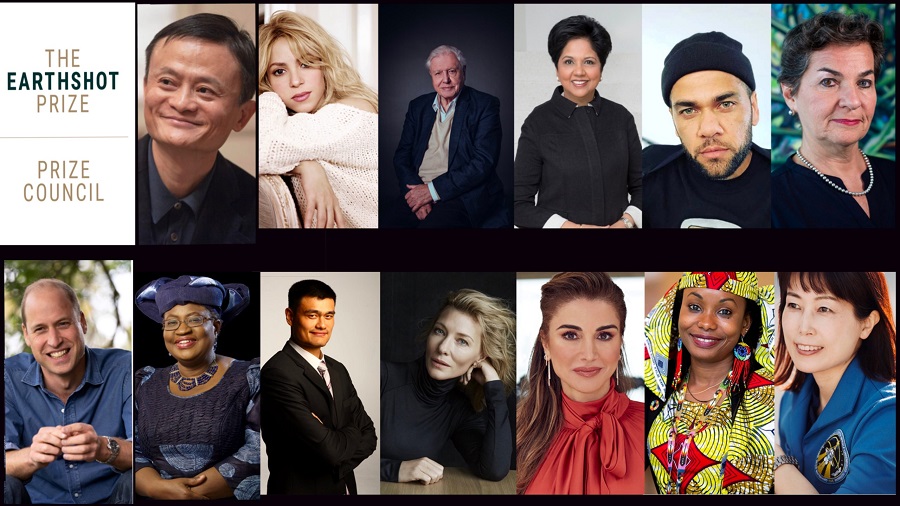 A raft of celebrities are pitching in to promote  The Earthshot Prize, a  £50 million (US$64.7 million) award that will go towards at least 50 solutions over the next ten years to help repair our planet.

The Earthshot Prize,  run by The Royal Foundation of The Duke and Duchess of Cambridge, the initiative takes inspiration from President John F. Kennedy’s Moonshot, which united people with a common goal and catalysed rapid development of new technologies in the 1960s.

“We only have one Earth in this world and the pandemic has made it clear that mankind cannot live without the Earth, but that Earth can live without mankind,” said Ma. “Today we all live in the same forest that is already on fire. If we work together, we can all do a little bit today, and overcome our challenges.”

In the months ahead, more members of The Earthshot Prize Council will be announced to form a global coalition to support the Prize as it expands. From next year onwards, the Council will be awarding the prize to five winners, whose science-backed solutions will help the planet move closer tofive “Earthshots” – protecting and restoring nature, cleaning our air, reviving oceans, building a waste-free world and fixing the climate crisis.

“All around the world, science and community-based initiatives are leading to ground-breaking inventions and solutions which, if provided with the platform and resources to be implemented on a larger scale, could have a significant and positive impact on the environment and global economy,” explains Blanchett. “The Earthshot Prize aims to do just that, and by providing this vital platform, we hope to refocus the narrative on climate change to one of hope and action.” says Sir David Attenborough. “I really do think things are about to start to move, and this sort of idea could be the spark that is really going to give it the lift and the impetus to develop into something huge. It’s a great source of hope, and I hope it spreads around the world.”

“Our responsibility is to leave our home better than we found it, so that future generations, no matter where they are born, or to whom, can thrive on the planet,” added Figueres. “The race is on and we are going to win it.”

The Council will be advised by a distinguished panel of experts to support the judging process for the finalists. Each winner will receive a £1 million reward (US$1.29 million) that will go towards agreed conservation or environmental projects and to scale their solution.

A new short film has been released alongside the latest announcement, which sees Prince William and Sir David Attenborough speaking about their passion to save the planet, and also features the other members of the new Council who explained why they have been motivated to participate.