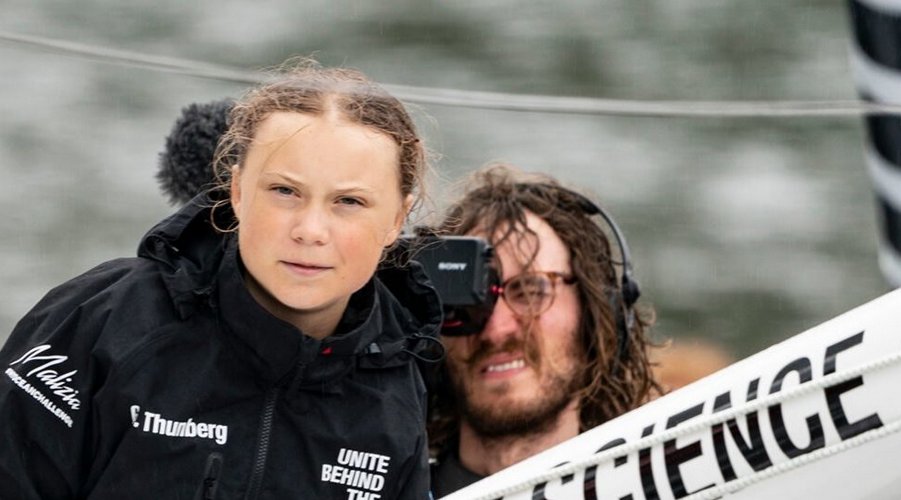 The new documentary, I Am Greta, has been 3 years in the making. It is the first movie that Nathan Grossman has made in which he documented Greta’s campaign since she started her SKOLSTREJK FOR KLIMATET.

There are many extraordinary things about the new documentary I Am Greta. The first is that the film happened at all.

The former film student was curious when he heard, in 2018, that 15-year-old Swedish girl Greta Thunberg had decided to bunk off school to sit alone outside the country’s parliament in Stockholm as part of what she was calling a “climate strike”. He started filming a few days later. At first, he shot in a low-quality mode on his camera to save space on memory cards, thinking he would be lucky if her story made a short feature for the local news.

But, within weeks, children around the world had started their own climate strikes. Arnold Schwarzenegger was retweeting Thunberg’s posts and Grossman had switched to full high definition. He continued to film Thunberg and her father at every twist and turn of the adventure that unfolded over the next year.

And what an adventure. Thunberg herself said it could be a movie but it would be a very surreal one “because the plot would be so unlikely”. Just being along for the ride is exciting enough, but I Am Greta does much more than that.

What Grossman has made is a coming of age movie wrapped up in a super-hero flick. This is the story of how a troubled and lonely child discovers her hidden powers and uses them to change the course of the world.

The secret of Thunberg’s charisma

The whole thing is just so unlikely. It turns out that this small, rather dour girl with pigtails has a preternatural charisma.

As we unravel the paradox of why that is, we begin to understand what is so special about Thunberg.

Most people don’t realise how unforgiving documentaries are on their subjects: If you pretend to be something you are not, you will be found out. The only way to be “good” at films like this is simply to be yourself.

Why she can’t look away

Early on in the film, she tries to explain why. “Once the climate crisis has got your attention you can’t look away,” she says. “Once you understand the magnitude of the problem, you can’t erase it.”

She doesn’t realise that this is the diametric opposite of how most other people feel: We know it’s happening but do everything we can to look away. Every time Thunberg addresses a conference, we see world leaders tapping away at their smartphones in the audience, or trying to get a selfie with her, but otherwise apparently oblivious to her words. That tension – between her desire for change and the lack of urgency the politicians feel – is what makes the story so electric.

When Thunberg urges the European Commission to take action on climate change in Brussels, Jean Claude Juncker – then the commission’s president – responds with a speech about harmonising Europe’s toilet flushes.

The compulsion to campaign

Thunberg gives us her take on events in diary excerpts. We learn she has no doubt that Asperger’s Syndrome is a central part of what gives her such “laser-focus”. “I have it, I wouldn’t say I suffer from it,” she corrects a reporter at one point. And the film shows how campaigning has helped lift Thunberg out of profound depression.

As her influence begins to grow, there is a wonderful sequence on a train where she is filmed writing her diary. “It feels almost indescribable that something is finally happening,” she writes and breaks into a contented smile. “There are so many who are interested in the same things as I am.”

She talks about how lonely she was at school and the eating disorders she battles. At one point her father mentions how her “selective mutism” and “compulsions” have vanished. There’s a touching scene where her mother chokes back tears as she describes the progress Thunberg has made. Yet you can’t help thinking her relentless compulsion to campaign can be a curse.

Towards the end of the film, we see her crouched in the cabin of the racing yacht taking her to New York. Huge waves crash past the windows behind her. Thunberg is in tears as she records her diary on a phone. She is missing her dogs, her home and her “routines”.

The climax comes with Thunberg’s “how dare you” speech, where she scolds world leaders for their lack of action. “The eyes of all future generations are upon you,” she warns at the UN Climate Action summit in New York, “and if you fail us, I say we will never forgive you.” It is an address that echoed around the world.

She later joins tens of thousands of protestors on the streets of New York – and millions more join climate strikes around the world. It is a triumph for Thunberg and her campaigning, and a landmark in progress for action on climate change.

But you can’t help but feel anxious for her future. We have seen the meaning and purpose she has found in campaigning and wonder how she will fare now she is back at school.

The final scenes of the film show Thunberg with her beloved pony. “I sometimes think it might be good if everyone had a little bit of Asperger’s,” she says as she grooms him, “…at least when it comes to the climate.”