Child chef Omari McQueen, who has his own recipe book and vegan food company at the age of 12, says he wants to encourage other kids to go vegan.

Omari McQueen has been honing his culinary skills for nearly half of his life – and he’s only 12! After starting his own vegan food company four years ago, Omari is now on to his next big project – a cookbook set to be released in January – and he’s determined to change the way kids look at vegetables.

Omari’s culinary journey began when his parents began teaching him how to cook when he was just 7 years old. Around that time, his mother was diagnosed with hemiplegic migraines, a very rare type of migraine that, among the usual symptoms like a throbbing headache, results in the body getting weak. Since his mother was ill and his father was often working late hours, Omari began to help out in the kitchen frequently at home and he quickly grew to love the process.

“I fell in love with cooking because cooking for me is like experimenting in the kitchen,” Omari, who is based in London, told TODAY Food.

“Why would I eat animals when the world is full of delicious and healthy foods that don’t harm them?”

While researching foods that might be beneficial to those who suffer from migraines, Omari started reading about veganism and he was instantly intrigued. “I looked on YouTube, a video came up and it changed the way I looked at things,” he said. “Why would I eat animals when the world is full of delicious and healthy foods that don’t harm them?”

When Omari was 8, he started a YouTube channel. For his first video, he made a vegan pizza with a homemade dip he called, “Caribbean Kick.” The dip was such a hit with his family that Omari decided to start selling it. “I went to an Ultra Education children’s business fair and sold my dips for fun,” he recalled. “Then when I realised I sold out and everyone loved it, I decided to make it my business.”
After creating two additional dips (Sweet Tooth and Coco Curry), the budding chef launched Dipalicious, a vegan food company that also sells snacks and meals. He also continued to build his YouTube channel, hosting cooking lessons for kids and their parents with tips on the best way to prepare certain veggies and tutorials that explain the nutritional benefits of different ingredients. Along the way, Omari has won several awards, including the 2018 TruLittle Hero award, PETA’s 2018 Compassionate Kids award and the 2019 Proud and Gifted Award.

Now, the 12-year-old entrepreneur is set to release a collection of 30 plant-based recipes in his first cookbook: “Omari McQueen’s Best Bites Cookbook.” “Readers can expect to try different foods and experiment with different flavors while having fun and learning top tips from me,” Omari said of his first book.

For the young chef, a cookbook is just the next step in what he hopes will be a very long, successful career. “I want a bus restaurant and to have my own ready meals so people can buy balanced vegan meals on the go,” he said. “I will also be putting up lots of cooking shows on my YouTube and on the Kidoodle app for people to interact with and would like to have a cooking show like Gordon Ramsay.” 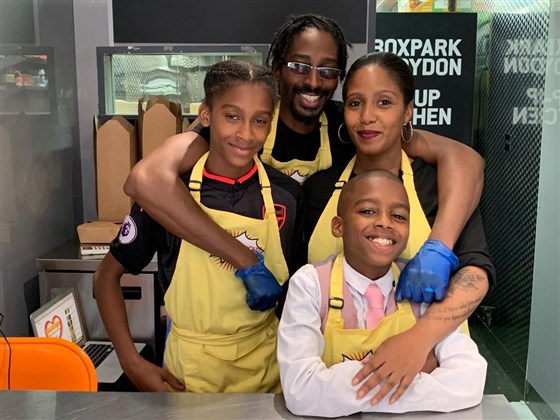 Omari is also quick to give credit where it’s due and acknowledged that his parents have helped him every step of the way. “They are the best. They have always told me and my siblings to follow our dreams and that age is just a number,” he said. “They have supported and loved me all my life so I will forever be grateful.”

His parents are both incredibly impressed with their budding chef’s early success and can’t wait to see what he does next. “Proud is not even the word to describe how we feel. Our children surprise us every day and we are truly blessed,” Omari’s father, Jermaine McQueen, said.