Farmers Starting to Kill Their Pigs After Process Factories Close

As slaughterhouse and meatpacking packing plants close all over the US because so many of the workers are falling ill with COVID 19, a backlog of animals doomed to slaughter, are cooped up in their horrendous factory farms because there are no workers to slaughter them.  Now they are just going to murder them.

A wave of shutdowns at some of North America’s largest meat plants is starting to force hog producers to dispose of their animals in the latest cruel blow to food supplies. 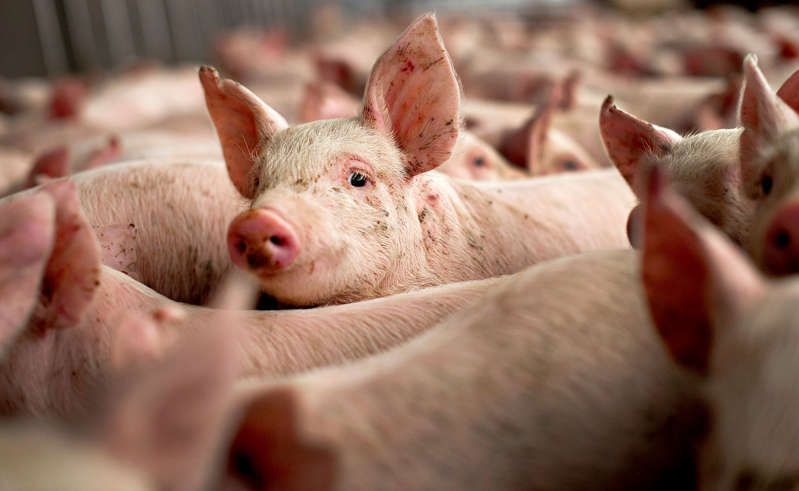 © Daniel Acker / BloombergShuttered
Reduced processing capacity has prompted some farmers in eastern Canada to euthanize hogs that were ready for slaughter, said Rick Bergmann, chair of the Canadian Pork Council. In Minnesota, farmers may have to cull 200,000 pigs in the next few weeks, according to an industry association. Carcasses are typically buried or rendered.“This is an unacceptable situation and something must be done,” Bergmann, who is also a farmer, said Thursday. The culling highlights the disconnect that’s occurring as the coronavirus pandemic sickens workers trying to churn out food supplies just as panicked shoppers seek to stock up on meat. Wholesale pork prices in the U.S. have surged in the past week. Hogs are the latest commodity that’s seeing supplies potentially go to waste as farmers in the U.S. and Canada lose money, with nowhere to sell their animals. Dairy farmers are spilling milk that can’t be sold to processors, broiler operations have been breaking eggs to reduce supplies and some fruit and vegetables are rotting in fields amid labor and distribution disruptions.In the U.S., at least eight major meat facilities have seen halts in the space of a few weeks, shuttering more than 15% of the nation’s pork processing capacity. In Canada, Olymel’s plant in Yamachiche, Quebec, that normally processes 28,000 hogs a week closed for two weeks on March 29 and is currently operating with one less shift.With packing plants closing, demand was getting hit for hogs already fattened up for slaughter, and for piglets that would typically replace those animals on the farm. Prices for 40-pound feeder pigs in the U.S. plunged to the lowest since August 2018, according to U.S. Department of Agriculture data.

In Canada, producers are losing between C$30 to C$50 per head ($21 to $35). The backlog of hogs waiting for slaughter in eastern Canada alone stood at 92,000 at the end of last week, according to the Canadian Pork Council. (Sounds more like condemned prisoners awaiting their fate.)

In parts of western Canada, producers who normally sell baby pigs to the U.S. are unable to do so due to closures at American processing plants, Bergmann said. The shutdowns eliminate slaughter for several weeks and that creates a huge backlog of animals waiting to move through the system, he said.

Canadian producers are hoping the federal government provides them with an immediate cash injection of C$20 per animal to pay bills and employees and weather the crisis. “It is high time that this murderous industry is no longer funded with levies. Provide producers who produce healthy plants with subsidies and dramatically improve the nation’s health)

“It’s backlogging and we’re fearful the problem is going to get worse,” Bergmann said.

“Farmers are starting to run out of options with what to do with market-ready pigs,” he said by telephone. “There are other pigs that have been born that need to get into that barn space.”

Hog farmers don’t have the facilities to hold the animals and when they grow too large to be handled by packers, growers don’t have much choice, said Steve Meyer, an economist at consultant Kerns & Associates.

By comparison, cattle ranchers have extra pens in the feed yard and can put animals on diets that are designed to slow their growth until slaughter capacity becomes available. Broiler operations have been breaking eggs for the past four to five weeks, Meyer said.

“Nobody wants to do this,” (what kill pigs before they are the right weight for slaughter?)  the said. “It’s not as easy as dumping milk on the ground like the dairy guys do. It’s not as easy as breaking eggs in a broiler operation and eight weeks later having fewer birds on the market. We have a 10 month chain from the time until the pigs hit the market.”