The growing demand for meat and dairy products is impacting the environment and contributing to the climate crisis, but what is the science behind this?

Humans should eat less meat and dairy to cut the nitrogen emissions produced by farming, according to a new report from UN scientists.

The livestock sector emits around 65 trillion grams (teragrams) of nitrogen a year – equivalent to one-third of all current human-induced nitrogen emissions, they say. This figure alone exceeds the ‘planetary boundary’ for nitrogen – one of nine boundaries that, if crossed, could endanger humanity’s future on Earth.

The bulk of agricultural nitrogen emissions comes from feed production and manure management systems to feed the cattle, rather than processing meat and dairy to make it fit for human consumption. Global livestock supply chains have significantly altered nitrogen flows over past years, thereby threatening environmental and human health

Scientists have already warned that atmospheric nitrogen needs to be reduced to around a quarter of its current volume or risk crossing a ‘deleterious or even catastrophic planetary boundary’. However, the nitrogen cycle receives far less attention from researchers than the carbon cycle, does, despite nitrogen posing just as large a risk as carbon, according to EU officials.

‘Given the magnitude of its impacts and its central role in both domestic and international nitrogen challenges, the livestock sector urgently requires a global initiative to tackle nitrogen pollution while supporting food security,’ said the authors of the report, published in Nature Food.

Livestock supply chains are a major source of nitrogen emissions, contributing roughly one-third of global anthropogenic [human-made] emissions, with significant impacts on pollution, climate change and biodiversity losses. Technical solutions and good practices, however, may not be sufficient to reduce impacts to acceptable levels.’

Blue-green algae blooms on water surface due to runoff from fertilised agricultural areas and sewage effluent which are rich in phosphorus and nitrogen that support the growth of algae.

How does eating meat and dairy products hurt the environment?

Eating meat, eggs and dairy products hurts the environment in a number of different ways. Cows, pigs and other farm animals release huge amounts of methane into the atmosphere. While there is less methane in the atmosphere than other greenhouse gases, it is around 25 times more effective than carbon dioxide at trapping heat.

Raising livestock also means converting forests into agricultural land, meaning CO2-absorbing trees are being cut down, further adding to climate change. More trees are cut down to convert land for crop growing, as around a third of all grain produced in the world is used to feed animals raised for human consumption.

As well as this, the nitrogen-based fertiliser used on crops adds to nitrous oxide emissions. Nitrous oxide is around 300 times more effective at trapping heat in the atmosphere. These fertilisers can also end up in rivers, further adding to pollution.

Overall, studies have shown that going vegetarian can reduce your carbon emissions from food by half. Going vegan can reduce this further still.

‘In parts of the world, a reduction in the production and consumption of livestock products is probably necessary to keep global nitrogen emissions within planetary boundaries.’

Global livestock supply chains have significantly altered nitrogen flows over past years, thereby threatening environmental and human health. The UN team conducted an assessment of the livestock sector’s impacts on global nitrogen flows and emissions, including international trade. Of the total 65 teragrams (Tg) of nitrogen a year from livestock supply chains, nitrates (NO3) – common sources of water pollution and biodiversity loss – contributed 29 Tg, while ammonia (NH3), which contributes to air pollution, poses risks to human health and causes water acidification, made up 26 Tg.

Ozone-layer-depleting nitrous oxide (N2O), a greenhouse gas that is 300 times more potent than carbon dioxide, contributed 2 Tg a year. Feed production releases around 44 Tg – or 68 per cent – of nitrogen per year, in particular through manure deposited on grasslands, manure spreading and synthetic fertiliser application to croplands. Manure management in the animal production stage is the second main source of N emissions, with around 20 Tg – 30 per cent – lost through volatilisation, nitrogen leaching and manure used to produce energy, they revealed. Nitrogen emissions from the processing of animal-sourced food such as meat, eggs and other dairy are minor in comparison – around 1 Tg of the 65 Tg total for one year.

Asia is responsible for the bulk of the livestock sector’s emissions, at 66 of the annual total. Most nitrogen emissions take place in the regions of South Asia, East and Southeast Asia and Latin America and the Caribbean, given the high numbers of livestock held in mixed and grazing backyard systems. In most East Asian countries, high NH3, N2O and NO3 emissions are explained by the large concentration of animals in large-scale farms and backyard pig farms. 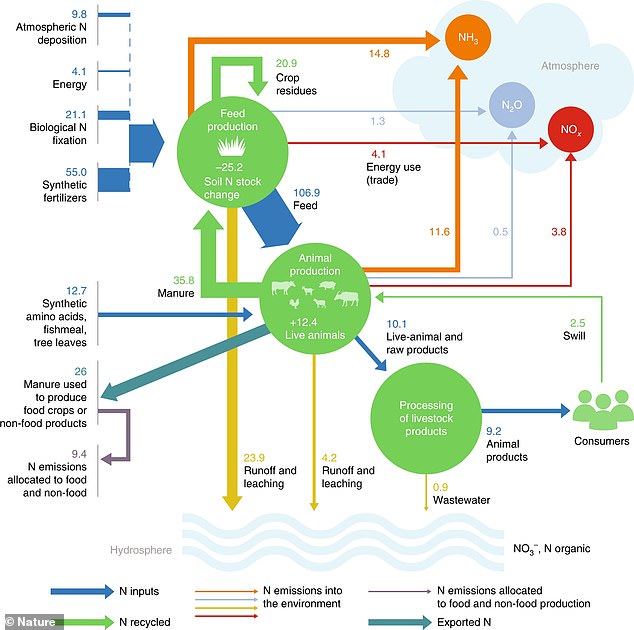 Nitrogen emissions associated with manure used to produce food crops and non-food products are aggregated. Losses of N2 to the atmosphere from manure management systems are estimated at 8.3 Tg nitrogen per year and are not shown here. All numbers are expressed in Tg nitrogen per year. 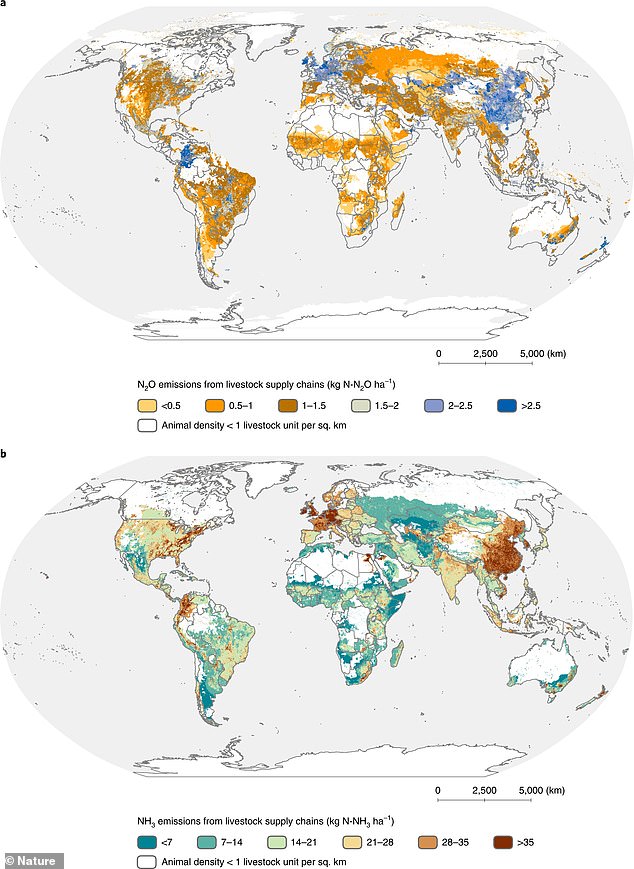 These are also associated with unregulated manure disposal and high rates of synthetic fertiliser application. Asia’s switch of larger farms that produce more manure than can be recycled in the surrounding area – on which synthetic fertiliser is applied – results in high emissions per unit of land area.

‘The livestock sector contributes to global nitrogen flows through the application of synthetic nitrogen-based fertilisers, the management and accumulation of manure, and the transport of nitrogen-rich products such as food and manure,’ the researchers say in their report. Giving farmers incentives to collect, transport and recycle manure to available croplands could help reduce nitrogen emissions, although this is often limited by high transportation costs, the team added.

The team call for the creation of a global initiative to tackle nitrogen pollution, with representation from the public and private sectors, civil society, academia, and stakeholders from the livestock and agriculture supply chain.’ Such an initiative should provide a platform for science-based dialogue on policies to mitigate nitrogen pollution from the livestock sector. This integrated approach would also help to address the many trade-offs between nitrogen management and other sustainability goals.’

How much NO2 is safe?

Nitrogen dioxide comes from vehicles, power plants, industrial emissions and off-road sources such as construction, lawn and gardening equipment. All of these sources burn fossil fuels. The US Environmental Protection Agency has issued guidance for safe levels of inhalation of Nitrogen Dioxide, measured in parts per billion breathed over the course of an hour. Safe to moderate levels range from zero to 100 parts per billion per hour.

Scientific evidence links short-term NO2 exposures, ranging from 30 minutes to 24 hours, with adverse respiratory effects including airway inflammation in healthy people and increased respiratory symptoms in people with asthma. Studies also show a connection between short-term exposure and increased emergency room visits and hospital admissions for respiratory illnesses. Individuals who spend time on or near major roads can experience NO2 exposures considerably higher than occurring away from roads. These exposures are of particular concern for sensitive groups, such as people with lung disease including asthma, children and older adults.