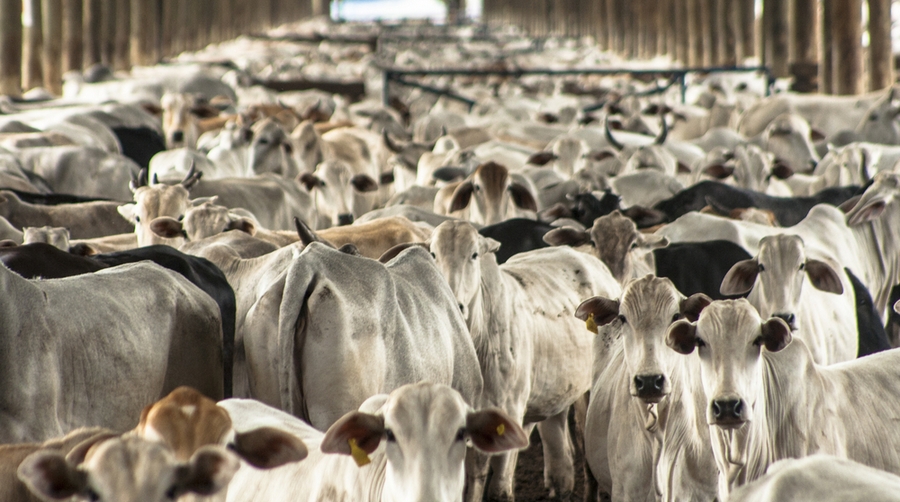 Rather than cull millions of livestock, let’s end Animal Agriculture once and for all. The whole situation is an incontrovertible nightmare. Meat producers everywhere have drawn consumer outrage and even death threats — but the farmers are appalled, too. “This makes me sick,” one farmer told Reuters, speaking on the condition of anonymity. Mercy for Animals has called the culling “horribly inhumane.” Industry spokespeople have described the situation as “tragic.”

The appalling way in which animals are treated in mass factory farms has got worse if that were possible. Because of the Coronavirus crisis, slaughterhouse and meat plant packers closures have left these animals with nowhere to go. The end result is the mass murder of animals who cannot be “killed for profit”. It is a total exercise in cognitive dissonance that cattle farmers decry the loss of their animals as a result of the Cotronavirus crisis. Why are they upset? They are only upset because they won’t make money if their flesh is not sold. It is laughable to portray cattle farmers as caring about the animals in Factory Farms.

As the U.S. economy reels from the COVID-19 pandemic, the country’s meat producers are facing a logistical disaster. Social distancing measures have forced restaurants and industrial food service providers to stall their operations, and meatpacking facilities across the country have shuttered or reduced capacity. With nowhere to send their chickens, pigs, and cows, farmers have been overwhelmed by a growing glut of animals within their crowded production facilities. Now, facing pressure to “depopulate,” they have begun to slaughter their livestock populations by the millions.

Supply lines across the food industry have been impacted by the coronavirus. Shuttered restaurants, university dining halls, workplace food providers, and more have all strained the food supply chain, as these large purchasers are no longer ordering food in the kinds of quantities they were just a couple of months ago. Now, suppliers of everything from milk to beans to tomatoes are struggling to shift away from industrial-scale production and redirect their products to grocery store shelves.

The meat industry has been hit particularly hard: In addition to closures of many of its largest purchasers, COVID-19 outbreaks inside meatpacking facilities have forced at least 20 of the country’s largest meat processing plants to shut down. Now, farmers who had planned to send their livestock to these facilities are finding themselves saddled with a buildup of live animals. Furthermore, the industry’s consolidation over the past 50 years has exacerbated the problem: A relatively small number of enormous meatpacking plants serve as chokepoints through which much of the country’s meat typically travels. There are fewer and fewer small and mid-sized processing facilities, and many of these have been overwhelmed by the redirected livestock and are now booked solid until late 2020. Meanwhile, growing numbers within controlled animal feeding operations have further jeopardized the entire population’s well-being, for example by limiting the group’s access to food and water. Farmers have called it a crisis of animal welfare: “The farmers we represent believe it it is unethical to allow any animal to suffer,” said National Pork Producers Council President Howard Roth in a press statement describing the situation.

Faced with overcrowding, farmers are presented with two options: limiting the growth of their animal populations (via induced abortions or withholding food to limit the animals’ physical size), or “depopulation,” also known as culling (pick your euphemism). For the latter, there are many methods available. Daybreak Foods Inc. recently used carbon dioxide saturation to euthanize 61,000 egg-laying hens in Minnesota. Other companies may choose to cover their flocks in a layer of foam, which blocks the birds’ airways and gradually suffocates them. The American Veterinary Medical Association also lists ventilation shutdown, which induces organ failure as temperatures rapidly rise, as an appropriate form of euthanasia.

These measures are necessary “to keep everyone safe — including all of our people and all our hens,” said Daybreak Foods’ Chief Executive Officer William Rehm in an interview with Reuters.

This is how a pig dies

Pigs may be killed by other means, including “gunshot, captive bolt, electrocution, and injection of anesthetic overdose.” One method called “blunt force trauma,” otherwise simply known as “thumping,” is specifically recommended for baby pigs, whereby the piglets are slammed headfirst into the ground.

By a conservative estimate, 2 million animals have already died in these ways, and many more will perish in the coming weeks. On April 28, Tyson foods, and animal agriculture processor and distributor, took out full-page ads in the New York Times, the Washington Post, and the Arkansas Democrat-Gazette warning that “millions of animals” would be killed on-farm due to the pandemic and the facility closures it had caused.

Ironically, all this euthanasia has created another logistical problem: How can farmers deal with all the animal carcasses? Rendering plants are normally able to turn the 50% of animal biomass that Americans don’t like to eat into things like pet food and fertilizer. But like the meatpacking facilities, these plants are being shut down or have begun operating with reduced capacity due to COVID-19. Furthermore, it is expensive to ship millions of carcasses to them.

There is no easy option. Disposal in landfills requires leak-proof trailers with absorbent liners. Burial requires adherence to state and federal water-protection regulations, which can be quite difficult. Composting requires massive inputs of carbon in the form of wood chips. And open-pit burning comes with a heavy environmental and human health cost — a single pig, for example, may release three pounds of particulate matter into the atmosphere.

We Need a New Normal

The whole situation is an incontrovertible nightmare. Meat producers everywhere have drawn consumer outrage and even death threats — but the farmers are appalled, too. “This makes me sick,” one farmer told Reuters, speaking on the condition of anonymity. Mercy for Animals has called the culling “horribly inhumane.” Industry spokespeople have described the situation as “tragic.”

David Newman, a farmer in Missouri, echoes the public impulse to return to business as usual. “We want to … see consumer confidence returned,” he told FERN. “Let us get back to work, to doing what we do best.”

But the pandemic is an opportunity to ask more probing questions about the nature of our system of animal agriculture. If what we do best is slaughter animals, will returning to that system be any less tragic? What is the material difference between sending millions of animals to their untimely deaths due to the coronavirus, before they are fully fattened, and sending over 50 billion animals annually to the slaughterhouse under the status quo?

The only consistent logic, as Matthew Scully writes in a breathtaking article comparing China’s “wet” animal markets to the United States’ factory farms, is that our fundamental relationship with animals is based on domination. “The most basic animal needs are always to be subordinated to the most trivial human desires,” he says.

Beyond this underlying rule, there is no coherence in the moral framework with which we regard and treat animals. Our perceptions are circumstantial, invoking justice in some cases but disregarding it in others. The differences are frivolous and arbitrary: The suffering of a pangolin in a Chinese wet market is abominable, but that of an American pig is inconsequential. The culling of two million chickens is gut-wrenching under pandemic circumstances; normally, their demise is unexceptional.

If America’s animals could make it to the market, would their suffering then be defensible? We have developed a justificatory framework that says yes: Human benefit legitimates the erasure and subversion of animals’ inherent status as living beings. But this twisted reasoning is malleable, and we can still choose compassion over dominion.

Meanwhile, the meatpacking industry’s behavior is exposing the absence of corporations’ compassion for their “products” — the live animals that drive their profits. Floundering in the face of production shortfalls, price spikes, restaurant closures, and more, the pork industry holds piglets ransom as it demands a $1 billion bailout from the federal government, threatening to end the piglets’ lives if it does not get what it wants.

In the midst of this pandemic, we must do everything possible to spare millions of animals from unnecessary suffering and death. But we must beware of empty compassion: COVID-19 is revealing the willful naiveté of our moral logic as it relates to animal welfare. Right now, we must demand that government funds not be directed to the mass murder of livestock — these funds must be directed as emergency aid to workers and farmers whose lives have been upended by the coronavirus.

In the long term, we must not waste this opportunity to start mending our broken relationship with animals. This begins with the end of factory farming and the redirection of all government relief and future subsidies towards plant-based agriculture and food processing. These kinds of systemic solutions are the only way to truly show compassion to animals. The virus has given us an opportunity to look, for a moment, directly into the eyes of our fellow beings. We will have failed them if, when restrictions begin to lift, we avert our eyes to their suffering.