With world attention on the human viral pandemic of COVID-19, concern is growing that countries are not focusing enough on halting the spread of ASF through better biosecurity practices, cooperation on intensive vaccine development, or transparency regarding outbreaks. 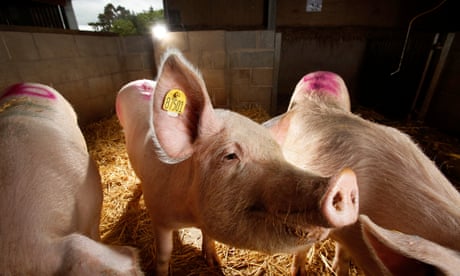 “The ASF virus is a much ‘stronger’ virus [than Covid-19], in that it can survive in the environment or processed meat for weeks and months,” Dirk Pfeiffer, a professor of veterinary sciences at City University in Hong Kong and a leading expert on ASF, told the Guardian.

ASF had been a problem for many years, but when it reached China in autumn 2018 the disease exploded and the following year saw huge numbers of deaths. The official count was of around 1.1 million pigs culled in the year after that according to the UN Food and Agriculture Organization (FAO).

The World Organisation for Animal Health (OIE), the UN agency based in Paris which monitors all notifiable animal diseases, told the Guardian it considered this “a reasonable estimate”.

Data from OIE for this year shows that global ASF numbers by the end of April are close to or already above levels for all of 2019. Currently, focal locations of the virus are primarily in China, Vietnam, the Philippines and a wide swath of Eastern Europe.

“The continuing new ASF outbreaks – which are reported through official OIE notifications, as well as picked up informally through media, and tracked through our emergency prevention system – confirm the ever-larger number of affected animals and the unrelenting spread of the disease,” Andriy Rozstalnyy, an animal health officer at the FAO told the Guardian.

The disease has now spread to northern India for the first time, as well as to Papua New Guinea. Recent outbreaks among wild boar populations in Belgium, now under control, have also heightened monitoring in western Europe.

“I think we can call it a pandemic, definitely,” said Timothée Vergne, an associate professor of veterinary public health at the National Veterinary School of Toulouse, France.

“I was expecting to see a significant decrease in the number of reports of ASF outbreaks [due to the Covid-19 crisis], but actually I was kind of amazed to see that it still goes on,” he said.

There are also concerns that China is underreporting the data for 2020. “We see ASF every week here,” Wayne Johnson, veterinarian at farm services company Enable Agricultural Technology Consulting, who is based in Beijing. “Provinces are told not to report. China does not report anything that would give [an] accurate account.”

Pfeiffer, who had sounded warnings along with Vergne and other researchers in a 2017 paper from Veterinary Record about the potential global impacts of ASF getting into China’s pig population,said China has now gone from culling, to controlling and living with it. “The benefit that the ASF epidemic has had for the financial performance of the mega pig producers in China adds another interesting dimension to the story. They have actually learned to ‘live’ with the disease in the country, and benefit enormously from the high pork price.”

Profits continue to skyrocket at top Chinese pork producers such as WH Group, Wens and Muyuan. None of these companies would comment when approached by the Guardian to discuss any enhanced biosecurity measures they are implementing at facilities in China.

Meanwhile urgently needed preventive action is being delayed, partly, ironically, because of the COVID-19 pandemic. “In order to protect the pig sector, and the people who rely on it, the only available course is global coordinated actions at all levels – this includes accelerating vaccine research, increasing biosecurity and surveillance, and enforcing policies for safe trade and cross-border movement,” said Rozstalnyy.

“At the same time there are some instances in which political or economic sensitivity could lead to unwillingness to report cases,” he said. “Tackling ASF in a globally coordinated way, where all countries can benefit from stronger multi-sectoral support, will require as much transparency and openness as possible.”

Pfeiffer believes the ASF virus is now almost “unstoppable” and fears are growing among pig producers in the US and Europe that it is only a matter of time before the disease reaches their pig herds from continuing outbreaks in China, Southeast Asia and Eastern Europe.

“A lot of it is about just a chance event,” Zoe Davies, chief executive at the National Pig Association in the UK, told the Guardian. “I believe it is here already. It’s just whether that chance event would happen, that somebody would go out into the countryside, and either put [contaminated meat] in a bin or chuck something over a hedge that the pigs got access to. The roots are there, it’s just about trying to minimise the risk of that happening.”