The vibrant city houses over eighty wild animal “wet” markets. Activists and campaigners are afraid of what this might mean in the future for public health.

New York City has over 80 wet markets – businesses that sell live animals to the public and slaughter them onsite.  New York’s live animal markets are located in all five boroughs.

Since 2016, public health and animal rights advocates have been sounding alarm bells about the City’s wet markets, pleading with health officials and lawmakers to shut them down in order to prevent the transmission and spread of infectious disease. COVID-19 is believed to have been transmitted from animal to human in a wet market in Wuhan, China.

NYC’s wet markets sell approximately ten animal species, including goats, sheep, chickens, guinea hens, rabbits, pigeons, Muscovy ducks, and quail.  The animals are confined in small cages or pens where they can sicken each other and the people who work and shop there. Animal feces, body parts, feathers and blood are tracked in and out by customers and pedestrians who then carry the refuse on to the subways and into their homes, offices and communities.

Wet markets, or live animal markets, are storefront slaughterhouses that sell live animals to public and slaughter them on site

“New York City’s wet markets are a ticking time bomb,” said Jill Carnegie, a co-organizer with Slaughter Free NYC, an organization advocating to shut down wet markets and other slaughterhouses in NYC. “If avian flu or another infectious disease is transmitted to just one human, it could spread very rapidly in New York City and beyond, as we have seen with COVID-19.”

The COVID-19 pandemic has increased the advocates’ sense of urgency. Slaughter Free NYC is now asking Mayor Bill de Blasio, Health Commissioner Dr. Oxiris Barbot and Deputy Commissioner of Disease Control Dr. Demetre Daskalakis to prohibit the slaughter of live animals in the five boroughs of New York. In February, the organization launched a petition with its demand. 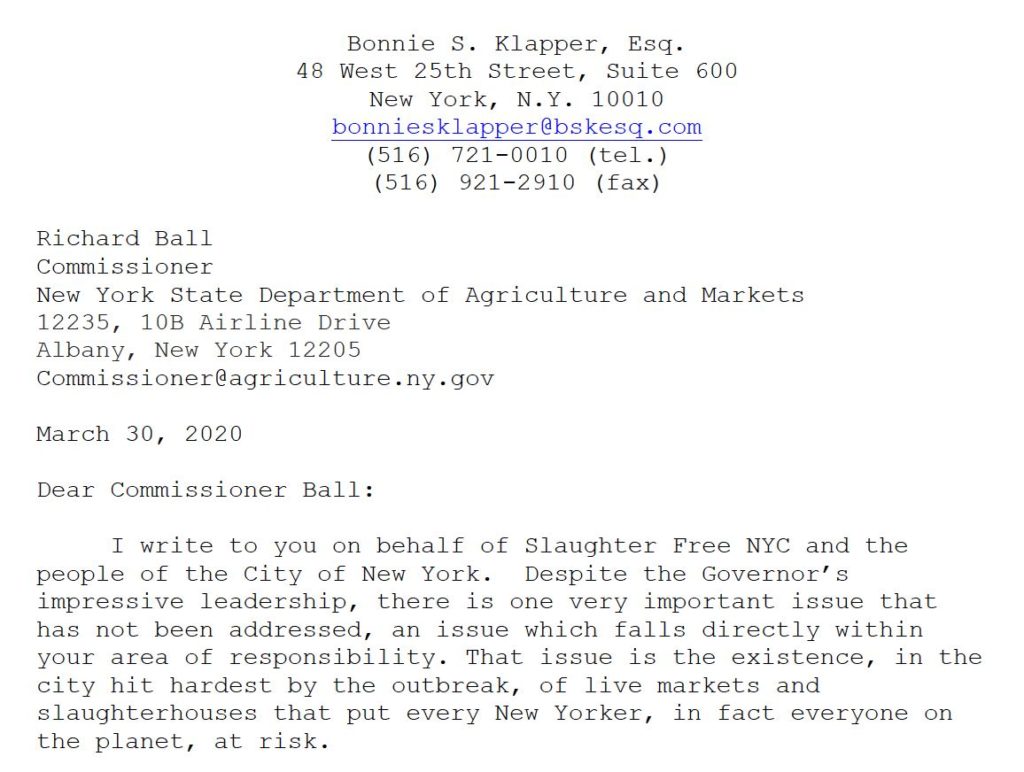 “The NYC Department of Health claims that it has no regulatory authority over these markets and defers to NY State Department of Agriculture & Markets, but state health officials have told me that these wet markets are never inspected unless they receive numerous complaints,” Klapper told TheirTurn. “That said, no amount of oversight can prevent disease transmission in storefront slaughterhouses where sick animals are coming into contact with humans.” 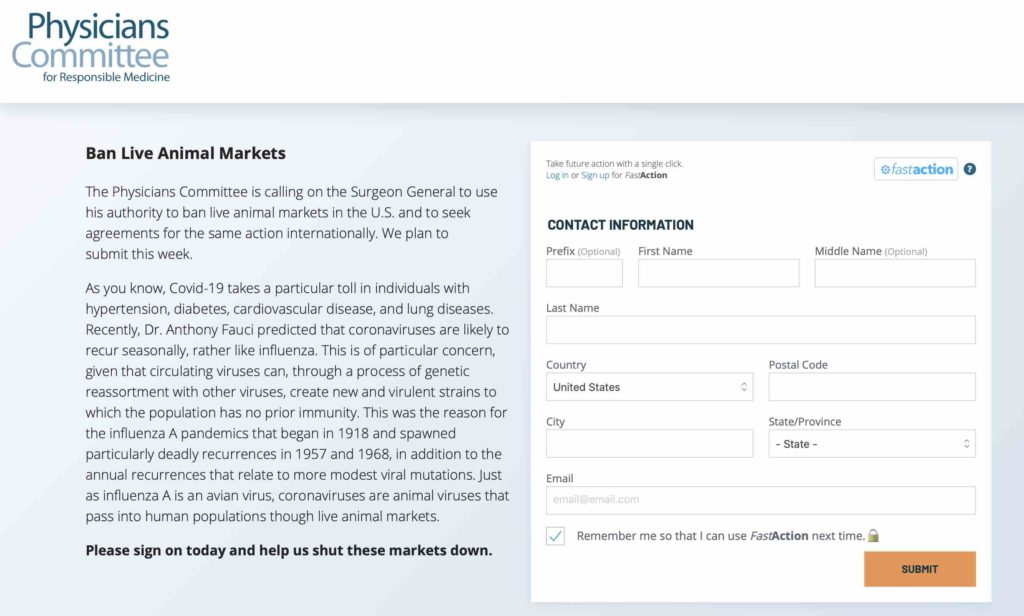 On March 25th, People for the Ethical Treatment of Animals (PETA) sent a letter to the Tedros Adhanom Ghebreyesus, the Director-General of the World Health Organization (WHO) encouraging him to call for the permanent closure of [wet] markets:  “Deadly outbreaks of mad cow disease, avian flu, swine flu, SARS, HIV, hoof-and-mouth disease and others have stemmed from capturing or farming animals for food. Live animal markets are perfect breeding grounds for diseases, which can jump from various others species to humans . . . If we’re to prevent future pandemics, we must heed the warning of top coronavirus researchers like Dr. Danielle Anderson, scientific director of the Duke-NUS Medical School, and cut them off at the source.” 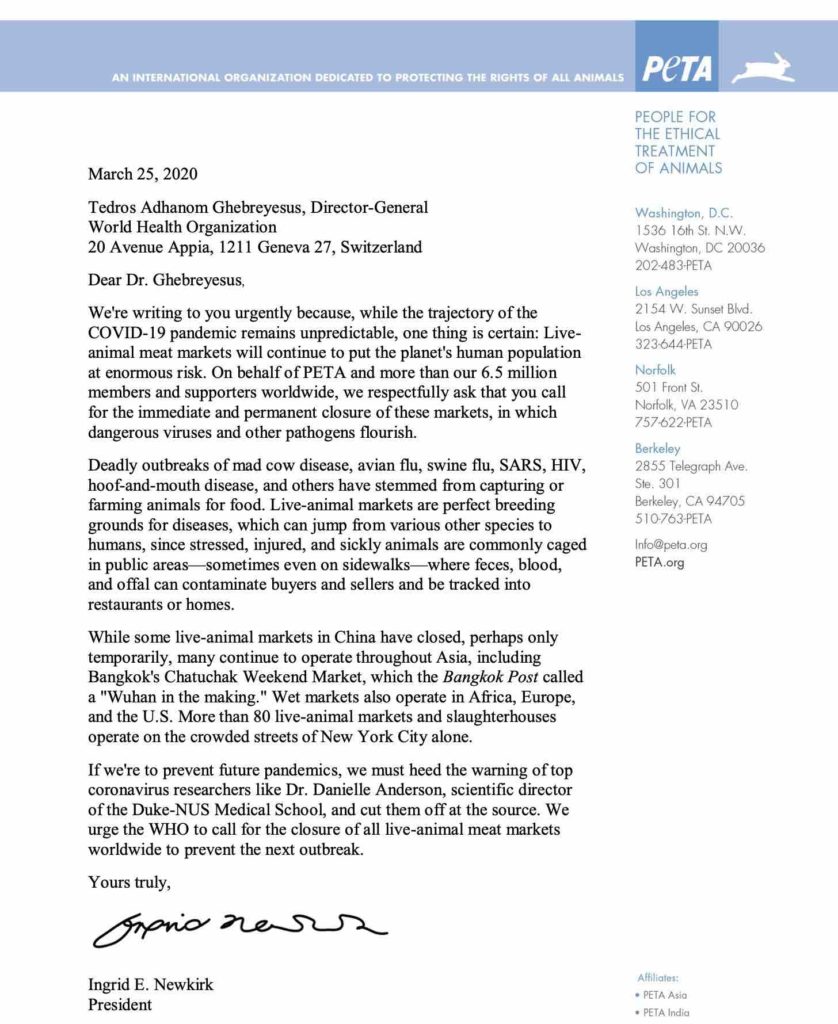 In partnership with The Save Movement, an organization that stages vigils at slaughterhouses around the word, Slaughter Free NYC conducts vigils and educational outreach at New York City’s wet markets.