A food revolution is happening right before our eyes as the meat industry takes massive hit amid pandemic, and plant-based meat sales soar.

The farmers and ranchers who supply the nation with hamburgers, pork chops, T-bone steaks and chicken fingers now confront several crises at once: Large processing plants are shutting down as workers fall ill, many producers were already strained by the trade war with China, and the sudden rise of plant-based “fake” meat alternatives had been starting to capture Americans’ imaginations.

On top of that,the meat business had been attracting growing scrutiny for its climate change consequences in recent years, with scientists and environmentalists urging Americans to eat less meat, particularly beef.

Cattle have an outsized environmental impact largely because they belch up methane, a potent planet-warming gas. Studies have found that beef production creates roughly four to eight times the emissions from pork, chicken or egg production, per gram of protein, and all have a larger climate-change footprint than plant-based proteins like soy or beans.

The Covid-19 pandemic could intensify these stresses on the industry, and although it’s still early, here’s how the pressures are playing out:

No shortages yet, thanks to the deep freeze 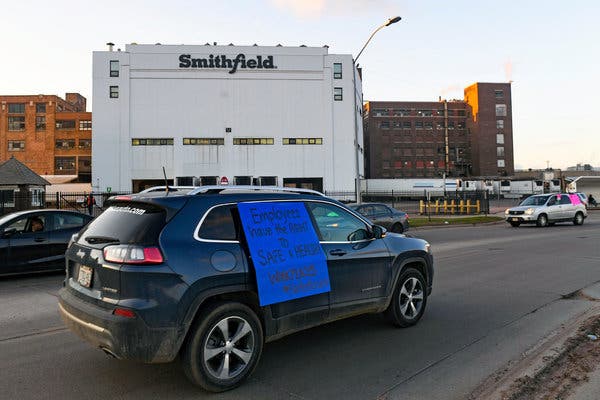 The biggest short-term disruption is the fact that a growing number of meat processing plants – where workers slaughter livestock and package food products – are shutting down as employees get sick from the coronavirus.

On April 12, Smithfield Foods said it was closing its Sioux Falls, S.D., plant indefinitely after 230 workers became infected. The facility processes roughly 5 percent of the nation’s pork. In Greeley, Colo., where at least four meatpacking workers have died, one of the nation’s largest beef-processing plants has shut down. Other plants in Iowa and Pennsylvania have also closed temporarily.

Plants like these are at the heart of a $140 billion meat industry that processes some 9 billion chickens, 32 million cattle and 121 million hogs each year. On the whole, agriculture accounts for 9 percent of U.S. greenhouse gas emissions, with livestock responsible for roughly two-fifths of that, much of it because of methane from burping cows and decomposing animal manure.

For now, there’s no danger of a large-scale meat shortage in grocery stores, analysts said. That’s because there are still hundreds of millions of pounds of beef, chicken and pork piled up in cold storage, particularly since producers are no longer selling to shuttered restaurants and schools. And processing plants that remain open have the capacity to pick up the slack.

Still, there are vulnerabilities.  Just 15 plants, mostly in the Midwest, slaughter nearly 60 percent of the nation’s pigs each day. “If we get to the point where we don’t have enough pork in storage, and multiple plants are no longer in operation than we could have problems,” said Dermot Hayes, an economist at Iowa State University, at a news conference on Tuesday. “But we’re not there yet.”

Will ranchers be keen to buy more cattle next year? 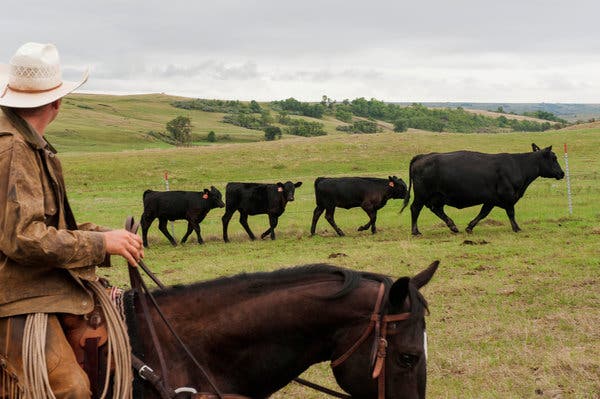 Cattle being sorted for weaning in Beulah, N.D., in 2017.Credit. Andrew Cullen/Reuters

As processing plants close, farmers and ranchers must keep their cows, pigs and chickens on feedlots or ranches for longer. But that costs them money: Instead of selling their animals for a profit, they must keep shelling out for more feed.

And many of these producers are also getting squeezed from the sudden drop in demand from a major customer – restaurants.

The hit comes at a precarious time. Pork producers were already hurting as the trade war with China had closed off a key market overseas. On Wednesday, the National Pork Producers Council highlighted a study estimating that the industry could face $5 billion in losses this year and warned that many farmers could go out of business without further federal aid.

While it’s early days, one possible consequence is that many farmers and ranchers could cut back investment in raising animals for the future. If that happens, and herd sizes end up shrinking, the nation could see a rise in meat prices at the grocery store two years or so down the road. (Over time, higher prices would likely spur more investment again, but it can take a while for these issues to resolve.)

“Everyone’s in preservation mode right now and holding off on making further investments,” said Colin Woodall, chief executive of the National Cattlemen’s Beef Association. Still, he added that many ranchers are waiting to see how the summer grilling season shapes as they start contemplating long-term decisions.

As for the climate effects of any changes in animal numbers, it’s complicated.

Fewer animals do tend to mean lower emissions, particularly methane from cattle. But over the past half-century, America’s ranchers have managed to produce more beef with about one-third fewer cattle thanks to advances in animal breeding, veterinary care, feed quality and grazing systems. Those efficiency gains, experts say, tend to be far more important for reducing the climate impact of livestock than short-term market fluctuation.

In recessions, people retreat from meat. 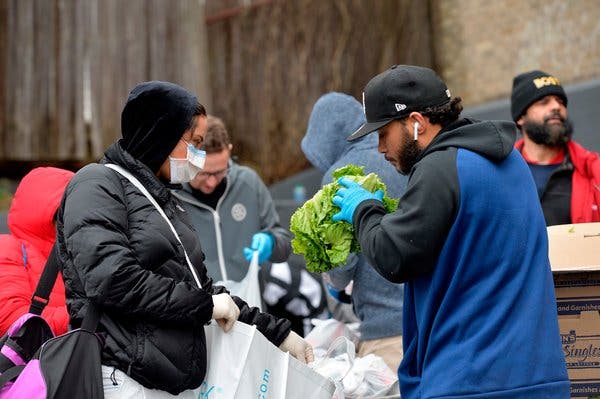 The pandemic is already pushing the United States into a deep economic slowdown. And, in the past, recessions have sometimes meant that people eat less meat, at least temporarily.

“If you think about protein sources, meat tends to be relatively more expensive, so if incomes fall or meat prices rise, people cut back,” said Jayson Lusk, an agricultural economist at Purdue University.

After the financial crisis in 2008, Americans cut back on meat in favour of eggs, nuts and legumes. The average person went from eating more than 200 pounds of meat per year down to around 185 pounds by 2012. Beef and pork declined significantly in favour of lower-cost chicken. Meat consumption eventually bounced back to pre-recession levels by 2018, though beef never fully recovered.

One climate consequence of that: The emissions associated with producing food for American diets fell roughly 10 percent between 2005 and 2014, according to estimates by the Natural Resources Defense Council, mainly because people were eating less beef. (Ranchers have been steadily exporting more beef, however, to countries like Mexico and China, where meat-eating is on the rise as incomes grow.)

Any drop in meat-eating wouldn’t necessarily affect everyone equally: One recent study found that about 20 percent of Americans account for 41 percent of emissions related to food production because they consume a disproportionately large amount of beef and dairy.

But cutbacks in shopping can also cause serious pain for many people: food insecurity typically spikes during downturns. 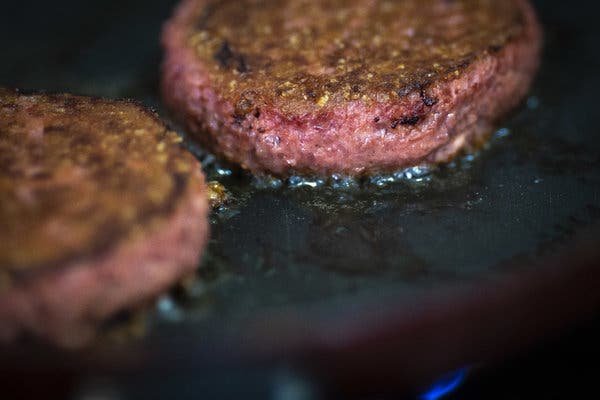 Plant-based meat substitutes like Beyond Meat burgers have shifted from curiosity to big business.

In recent years, companies like Impossible Foods and Beyond Meat that produce plant-based “fake” meat alternatives have made major inroads – they’re even in chains like Burger King.

In 2017 and 2018, investors put more than $13 billion into companies like these as people warmed to the idea of more environmentally sustainable options that don’t taste like the veggie burgers of old. The big question now: Will they become more popular in a time of economic crisis, or less?

He noted it’s too early to tell how the competition might unfold, though early data suggests that sales of both traditional meat and plant-based alternatives spiked during the initial wave of coronavirus-induced panic shopping. Will that hold up? “During a crisis, we could see consumers go back to the comfort of what we’re used to,” Mr Close said, referring to traditional meat.

Ultimately, a lot could depend on economics. Plant-based meats still tend to cost more, though analysts expect prices to decline over time as new products enter the market. And if the cost of beef, pork or chicken does rise in the coming years, that could tip the balance.

“If we do see meat shortages or if meat prices do start rising down the road,” said Dr Lusk, the Purdue economist, “maybe we see more people trying out those alternatives.”