An online meat calculator called Omni Calculator measures an individual’s meat intake and how much their food choices contribute to the climate crisis.

When I came across Omni’s meat footprint calculator, I had just finished a two-week experiment to see if I could go vegan. I had seen major new studies warning us to slash meat consumption or face a climate catastrophe, and I wanted to do my part to help avert it. But somehow my experiment went awry: I was so bloated by the end of two weeks that I devoured a cheeseburger, figuring a rapid reduction in fiber would get me back on track.

Before my failed stint as a vegan, I had been eating a mostly Mediterranean diet—lots of fruits and veggies, whole grains and olive oil; some fish, poultry, cheese, and eggs; small amounts of beef; and, occasionally, junk food like the aforementioned burger.

Last year, the medical journal The Lancet reported that global consumption of red meat needs to fall by 50 percent by 2050 for us to “remain within a safe operating space” on climate change. And in 2018, the journal Nature reported that beef consumption in Western countries needs to fall by 90 percent. Meat production is the primary source of methane emissions, a greenhouse gas 86 times more potent than carbon dioxide over a 20-year period, and beef cattle produced over 70 percent of it via enteric fermentation—belching and farting—in 2016. (Dairy cattle accounted for another 25 percent that year.)

Hannah Pamula, the meat calculator’s designer and a graduate student at AGH University of Science and Technology in Kraków, Poland, says we don’t need to ditch meat altogether in order to achieve significant reductions in emissions. For Pamula, the key is to persuade a lot of people to cut their meat consumption, not to push a vegan diet on everybody.

“[We] need to be realistic, so my tool doesn’t want to convince anyone to go vegan,” Pamula told me by email. “We believe that showing people the scale of the issue will make them think for a while and hopefully influence them to change their eating habits. Even a slight reduction in our meat consumption would matter. Skipping one burger a week could already be of huge help,” she said.

My disastrous foray into veganism made me hope that I really could just eat the equivalent of one fewer burger a week and still meaningfully reduce my greenhouse gas emissions. I decided to track my diet for two weeks on Pamula’s calculator to see how it might change my eating habits. The calculator is hosted on the website of Omni Calculator, a Polish startup specializing in custom-built calculators that provide data to help solve a wide variety of real-life problems (of the 1,009 calculators available on the website, only 17 have to do with the environment).

Trying out the meat calculator is simple. Users enter the number of three-ounce servings each of poultry, beef, pork, lamb, and fish they ate over a week and get back a few standard results—such as the amount of greenhouse gas emissions their meat produced and what the environmental damage would be of eating that way all month. Unlike with other carbon footprint calculators, however, users also get real-world equivalencies for those results to help them wrap their heads around the impact of their meat consumption. At least, that’s what using the calculator did for me. 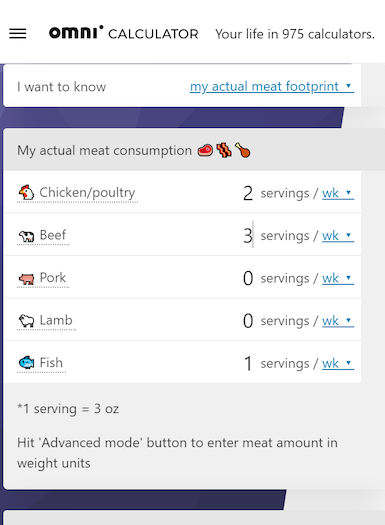 The first week of my experiment, I ate my standard diet. As soon as I began tracking my food intake, I realized that each of my servings of meat was double what I thought it was. For example, during week one, I ate a beef and broccoli stir-fry for three nights that I had batch-cooked on Monday. What I thought would amount to less than three servings of beef for the entire week actually amounted to five servings. Had I eaten that way all month (I also had two servings of chicken and one serving of fish, for a total of eight servings, or 24 ounces, of meat that week), my meat consumption would have produced 380.7 pounds of greenhouse gas emissions. According to Pamula’s calculator, that was equivalent to the emissions produced from charging 22,106 smartphones, consuming 19.4 gallons of gas, and driving an average car 428.3 miles. In other words, driving from my apartment in Oakland, California, to Los Angeles would release fewer emissions into the atmosphere than eating six pounds of meat.

The following week, I eliminated just one beef entrée (the equivalent of two servings) from my diet and kept everything else the same. That tweak, sustained over a month, would’ve cut my greenhouse gas emissions by about 63 percent, to around 239 pounds. That felt like a triumph—I thought, “I can eat meat and still save the planet!”—until I saw the math. Those 239 pounds of emissions were like driving 269 miles and burning 12.2 gallons of gas. My emissions had tumbled significantly, but at just 4.5 pounds of meat consumed, they were still high enough to get me to Lompoc, a city 163 miles outside Los Angeles.

Had I replaced all my beef with chicken, I would’ve reduced my emissions by about 28 percent without reducing my overall meat consumption, the calculator also showed. It was a decent decrease in emissions, but it still would’ve gotten me 76 miles north to the state capitol in Sacramento.

“If you tell someone that two servings of beef in a month, which is similar to just one burger a month, is equivalent to 32.6 pounds of CO₂eq [greenhouse gas emissions] produced, it might seem like a small number. But if you find out that it’s similar to charging 1,891 smartphones or even driving for 36.6 miles, then it’s alarming,” Pamula explained by email. And she was right. Realizing I could drive the length of the state on the emissions from my meat intake was a wake-up call.

What, then, is a reasonable amount of meat to eat? During my two-week stint using the calculator, I watched Cowspiracy: The Sustainability Secret, a 2014 documentary about animal agriculture and the environment in which food author and journalist Michael Pollan says Americans need to cut their current nine ounces of all types of meat a day down to a couple of ounces a week to sustain a projected global population of 9 billion people. Pollan still stands by that estimate, confirming it for me by email. That’s less than one serving of meat a week.

Meanwhile, The Lancet estimates that a global shift to plant-based diets could slash greenhouse gas emission by up to 80 percent by 2050, while measures meant to raise livestock more sustainably will only reduce them by about 10 percent. “Even small increases in consumption of red meat or dairy foods” will render climate change mitigation “difficult or impossible to achieve,” the report stated.

As pressure to cut back on red meat grows, the beef industry is retooling its message around sustainability. Asked to comment for this story, the National Cattlemen’s Beef Association cited a 2013 study finding that, as a result of sustainability measures, the United States and other developed countries have a carbon footprint for beef production of 10 to 50 times lower compared with many countries in sub-Saharan Africa and the Indian subcontinent. “We’ve proven in the US that beef can be raised sustainably,” the Beef Association said in a statement.

But a 2018 report from the EPA found that methane emissions from beef cattle increased in the United States by nearly 2 percent between 1990 and 2016, driven in part by increases in the cattle population. Also in 2018, the US Department of Agriculture estimated beef consumption in America would grow by 3.7 percent that year, and that annual red meat and poultry consumption in the country would reach “record highs” of 222 pounds per person. The USDA also found that US net exports of red meat and poultry had increased by an average of 7.2 percent since 2000 and were expected to increase another 5 percent to over 600 million pounds of meat, in 2018.

These figures are scary. But it was the gut-punch from Pamula’s calculator that ultimately made me decide to try going vegan again. It was nice seeing my emissions plummet that second week, but given what’s in store if we don’t drastically change our eating habits, the reductions seemed inadequate.

I was still afraid of potential adverse symptoms, however, so I emailed registered public-health dietitian Matt Ruscigno for advice. A vegan for over two decades, Ruscigno said some bloating and abdominal discomfort are normal when making the switch, because of the extra intake of fiber from plant foods and oligosaccharides from beans. Digestion usually returns to normal within a few weeks, he said, and bloating can be minimized by gradually increasing the amount of plant foods and whole grains instead of switching diets abruptly like I had.

So, I’m giving it another try, this time a bit more cautiously.