Ten vegan duos we are loving this Valentine’s Day

We are head-over-heels for these plant-based professional athletes, supermodels, and business leaders who are making the vegan lifestyle look so polished and cool.

Of course we love our significant other, but sometimes we find ourselves simply smitten with those gorgeous vegan celebrity couples gracing the red carpet. Truth is, we are head-over-heels for these plant-based celebrities, professional athletes, supermodels, and business leaders who are making the vegan lifestyle look so polished and cool. Here are 10 vegan duos we are loving right now:

This star couple hasn’t tied the knot (yet), but we’ve been following their discreet romance for years now. Both have earned our true devotion through their iconic roles – Phoenix most recently in Joker and Mara for making the beloved and fierce main character in The Girl with the Dragon Tattoo come to life. The two are currently engaged, and we cannot wait for their epic vegan wedding.

If our only form of entertainment came from this power couple, we’d be perfectly fine with that. Notaro seems to have worn every kind of entertainment hat there is—from standup comedian to writer to producer and every role in between. She is currently on tour with her comedy special and wrote the screenplay for an upcoming Netflix film starring Jennifer Aniston—First Ladies. Allynne is a triple (or quintuple) threat in her own right. She’s acted in a number of films and television series from Twin Peaks to the new series The L Word: Generation Q. She’s also worked as a writer, director, producer, and standup comic.

We’re celebrating this vegan couple on Valentine’s Day by watching one of James’ most classic and tragically romantic films—Titanic. Not to be out-shadowed, Suzy is an accomplished actress, respected environmental advocate, and founder of the MUSE School – America’s first K-12 vegan and zero-waste school with a unique education model to foster individual learning. Suzy is also the author of One Meal a Day – a book based on her program to encourage others to try to eat just a bit more plant-based.

Smith went vegan in 2018; Schwalbach has been a vegetarian for most of her life. The comedian, actor, and director of cult classics such as Clerks and Jay and Silent Bobtook up the plant-based lifestyle after a life-threatening and unexpected heart attack, and he’s been an advocate for the movement since regaining his health. While Schwalbach has not gone public with her shift from vegetarian to vegan, she has openly supported her husband’s decision to stick with the diet. The two met when she was still working as a USA Today reporter, and she has appeared in several of his films since they tied the knot. Their daughter, actress Harley Quinn Smith, is a dedicated vegan advocate and leads by example to them both.

Hailing from the UK, this may be our most red-carpet-ready duo. Smalling is a professional soccer (ah-hem, football) player at the top of his game. A Manchester United man since 2010, he’s currently on loan to team Roma and crushing it. In fact, the UK team is currently offering £25 million to get him back based on his stellar performance this season. Cooke is a former glamour model and has graced the covers of countless magazines. After finding a love for vegan cuisine, she convinced Smalling to follow suit. Looking at his success, the diet change is definitely paying off.

People show love in different ways, and this couple’s Heaven and Hell wedding was nothing short of unorthodox. The wedding was held in 2018, and we still keep thinking about the blood-red-hued venue, Von D’s red horns, and their gothic vegan red velvet castle cake. Of course, given their personalities, we wouldn’t expect anything less. Von D rose to fame through her appearance as a tattoo artist on TLC’s LA Ink then launched her own vegan and cruelty-free make-up brand Kat Von D Cosmetics. Rayes, also known by Leafar, is an artist and musician credited for birthing the Cholo goth genre. Need a fun Valentine’s date idea? Try recreating elements of this couple’s wedding.

He’s the king of comedy and she’s the queen of cookies. A standup comedian and ventriloquist, Jeff is definitely a people person—or at least a puppet person. He went vegan following in the footsteps of Audrey who acts as a blogger, former fitness competitor, and owner of Peanut’s Bakeshop – a gluten-free vegan cookie mix company named after one of Jeff’s characters. The pair have two adorable twin boys who are also vegan.

He runs ultra-endurance races and hosts an internationally acclaimed podcast. She practices yoga and makes artisan vegan cheese. Together, they live off the beaten path in their gorgeous-yet-secluded home in Malibu, CA where they can let their physical and creative energies take flight. They host annual vegan wellness retreats in Europe, co-write plant-based cookbooks, and run a thriving plant-based meal planner. Amongst all of this, both remain humble and generally avoid the spotlight.

We just stare in awe as this power couple passes us by wearing their matching Switch4Good cycling gear. While Dotsie fields the press inquiries and appearances – she won a silver medal in the 2012 Olympics and starred in the documentary The Game Changers – Kirk is an accomplished cyclist in his own right. He also assists his go-getter wife with her nonprofit, Switch4Good, which encourages everyone from elite athletes to everyday active folk to live better and do more by ditching dairy.

The Morgans are responsible for encouraging fifteen Tennessee Titans to opt-in to Charity’s plant-based meal program. While not all players went completely vegan (like former linebacker Derrick), they stuck to the diet during training hours thanks to Chef Charity’s prepared meals. 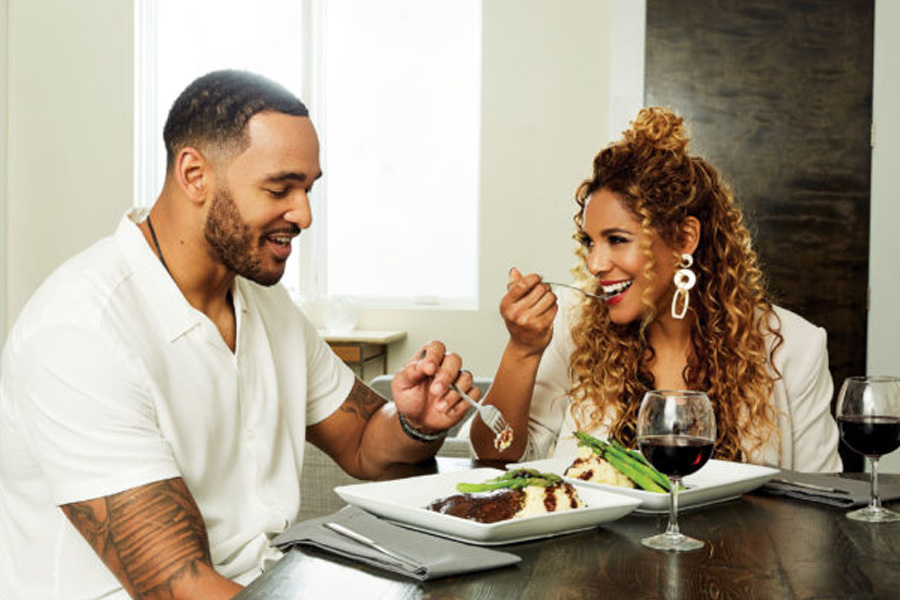