Imagine that while your country practised social distancing, your neighbouring country responded to Covid-19 by packing citizens into gymnasiums by the tens of thousands. Imagine if, in addition, they instituted genetic and pharmaceutical interventions that helped their citizens maintain productivity under such adverse conditions, even though this had the unfortunate side effect of devastating their immune systems. And to complete this dystopian vision, imagine if your neighbours simultaneously reduced their number of doctors tenfold. Such actions would radically increase death rates not only within their country, but yours. Pathogens do not respect national boundaries. They are not Spanish or Chinese.

Pathogens do not respect species boundaries, either. Influenza and coronaviruses move fluidly between human and animal populations, just as they move fluidly between nations. When it comes to pandemics, there is not animal health and human health – not any more than there is Korean health and French health. Social distancing works only when everyone practises it, and “everyone” includes animals.

The meat that we eat today overwhelmingly comes from genetically uniform, immunocompromised, and regularly drugged animals lodged by the tens of thousands into buildings or stacked cages – no matter how the meat is labelled. We know this, and most of us would strongly prefer it be otherwise. But we would prefer a lot of things in the world that aren’t so and, for most of us, the future of animal farming is low on our list of priorities, especially now. It is understandable to be most concerned with oneself. The problem is, we aren’t doing a good job of being selfish.

We don’t yet know the full history of the emergence of Covid-19, the particular strain of coronavirus that now threatens us. But with recent pandemic virus threats from influenza viruses such as H1N1 (swine flu) or H5N1 (bird flu) there is no ambiguity: those viruses evolved on chicken and pig factory farms. Genetic analyses have shown that crucial components of H1N1 emerged from a virus circulating in North American pigs. But it is commercial poultry operations that appear to be the Silicon Valley of viral development.

It is on chicken factory farms that we have most frequently found viruses that have mutated from a form found only in animals into a form that harms humans (what scientists call “antigenic shift”). It is these “novel” viruses that our immune systems are unfamiliar with and that can prove most deadly.

Of 16 strains of novel influenza viruses currently identified by the CDC as “of special concern,” including H5N1, 11 come from viruses of the H5 or H7 type. In 2018 a group of scientists analysed the 39 antigenic shifts, also called “conversion events,” that we know played a key role in the emergence of these particularly dangerous strains. Their results prove that “all but two of these events were reported in commercial poultry production systems”.

Imagine if our military leaders told us that almost every terrorist in recent memory had spent time in the same training camp, but no politician would call for an investigation of the training camp. Imagine if we knew that those terrorists were developing weapons more destructive than any that has been used, or tested, in human history. This is our situation when it comes to pandemics and farming.

The United States CDC is the abbreviation for an agency whose name is actually the Centers for Disease Control and Prevention. We drop prevention from the acronym, which is innocent enough. But we also tend to drop serious discussion of prevention in favour of tactics for responding once pandemics hit. This is understandable – especially in the midst of a pandemic – but recklessly dangerous. We are preoccupied with the production of face masks, but we appear unconcerned with the farms that are producing pandemics. The world is burning and we are reaching for more fire extinguishers while gasoline soaks through the tinder at our feet.

To reduce risk of pandemics for ourselves, our gaze needs to turn to the health of animals. In the case of wild animal populations, such as the bats that scientists have theorised as a probable origination point for Covid-19, the best solution seems to be to limit and regulate human interaction. Much has rightly been written on this and, slowly and unevenly, policies seem to be moving in the right direction. As it became established that a number of people contracted the virus after visiting a wet market in Wuhan, where the virus likely passed through humans from bats via an intermediate host, China shut down 19,000 wildlife-farming operations and banned meat from wild animals at wet markets.

In the case of farmed animals, though, the lack of public understanding has allowed unscrupulous corporations to move policy in exactly the wrong direction. Across the globe, corporations have succeeded in creating policies that use public resources to promote industrial farming. One study suggests that the public is providing $1m per minute in global farm subsidies, overwhelmingly used to prop up and expand the current broken model. The same $1m a minute that promotes factory farming also increases pandemic risk.

In the US, the death rate for Covid-19 has been less than 2%, but had this been, say, H5N1 the death rate would be far higher – the CDC reports a 60% death rate. After a spike of H5N1 deaths in 2017, the virus’s spread subsided for reasons that remain unclear. Should we be relieved? Nancy Cox, who led CDC’s influenza operations for more than two decades, has emphasised: “We don’t know how the story’s going to end.” H5N1’s failure to reach pandemic proportions simply means we have a terrorist kicking around who is just one small viral mutation away from obtaining the equivalent of a nuclear arsenal.

The implications of a 1-2% death rate are all around us: half of the world is living under stay-at-home orders, children don’t go to school, hospitals are running out of life-saving equipment, we are facing a generational financial depression, and the funeral services that have traditionally allowed us at least to mourn together are being (rightfully) banned. Can we extrapolate the implications of a 60% death rate in our imaginations? That would be a 30-fold increase over our current situation. What if the next pandemic didn’t spare children? The death rate for children infected with H5N1 approaches 50%. How does it feel if you imagine one person you love a coin toss away from a horrible death? Try imagining if half of everyone you know who had the flu last year was now dying. If you have children, how many of them had the flu last year? Force yourself to imagine these things then ask yourself: how much would it be worth sacrificing now to avoid that happening? 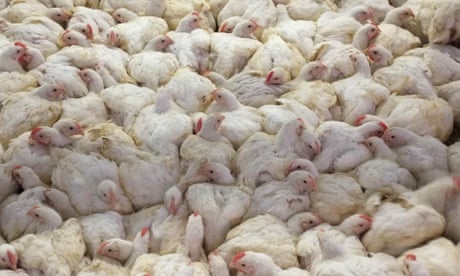 This leads to the most pertinent question: What can we do? The link between factory farming and increasing pandemic risk is well established scientifically, but the political will to curtail that risk has, in the past, been absent. Now is the time to build that will. It really does matter if we talk about this, share our concerns with our friends, explain these issues to our children, wonder together about how we should eat differently, call on our political leaders, and support advocacy organisations fighting factory farming. Leaders are listening. Changing the most powerful industrial complex in the world – the factory farm – could not possibly be easy, but in this moment with these stakes it is, maybe for the first time in our lifetimes, possible.

The fact that we know our food system is partly to blame can empower us. We know how to strike at the single greatest risk factor for pandemics. We know how to make ourselves and our families safer. The very uncertainty that unsettles us also reminds us that everything can change for the better, too. Thankfully Covid-19 seems to attack our children extremely rarely, and if we respond with sufficient wisdom, this time that is so marked by death will perhaps also be remembered by them as a turning point, a time of reckoning, quiet heroism and, as the months pass, renewal.